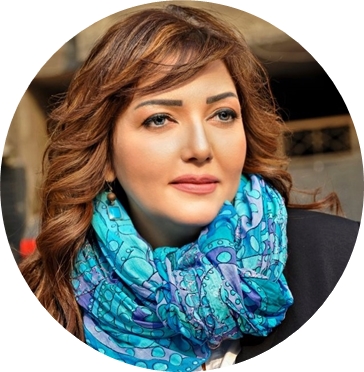 Gameela Ismail is an Egyptian politician, activist, media presenter and Co-founder/leading member of Egypt’s Al Dostour political party. She is the creator, director, and producer of the self-filmed “Hekayat Gameela,” or “Gameela’s Stories”. Gameela was named 39th in a list of the 200 most powerful Arab women by Arabian Business magazine in 2017.
.
She is one of the founders of Medina, an online media platform that launched in 2016, and the platform on which “Hekayat Gameela” is published. “Hekayat Gameela” is a series of short films written, filmed and directed by Gameela, with her smartphone. The program is the first of its kind to be produced in Arabic, paving the way regionally for the concept of ‘Personal TV.’ The program and its concept won first place in MBC HOPE Competition in Dubai in 2017 for the best documentary work empowering women and society.
.
In 2011, Newsweek named Gameela as one of the world’s 150 most influential women. In 2012 BBC called her a ‘Sister of the Revolution,’ along with three other Egyptian women. In 2015, Gameela was voted the most important and influential Arab politician in a CNN poll. In 2016, she was rated as 180th out of the 250 most influential women in the world on social media, which looked at Facebook and Twitter accounts. In the Media: Gameela has worked in the media since her graduation in 1986.
.
She was a stringer /correspondent for Newsweek in Cairo for about 20 years, where she specialized in covering political Islam and terrorism issues. Later, she worked with Thomson Reuters, Cairo Today Magazine. During her years in the media, Gameela has presented a number of television programs on Egyptian TV and has received awards for her uniqueness in portraying the voices of the people through her street programs. Gameela hosted the political TV  program “E3adet Nazar” or “A Reflective Look,” on Al Nahar channel after 2011’s Egypt’s Revolution.
.
Politics and Activism: Gameela is a founding and leading member of “Al Dostour” political party and a former parliamentary candidate. She has been politically active since 2001, when she ran for parliament in the constituency of downtown Cairo. She went through numerous political battles and took part in founding most of the movements calling for political change and defying the inheritance of presidential rule. Gameela was among the first to call for 2011’s Egyptian revolution. She participated in the establishment of Al Dostour and served as the party’s organisation Secretary in 2012.
.
Watch her recent documentary on COVID-19, titled: Normal or Neo-Normal fear? - The fear trilogy - Part 1 - Beautiful stories.

Gameela’s Stories is a video-based project hosted by the online platform Medina. Our series started with a simple idea: we wanted to tell the stories of another Cairo, a parallel city living at the margins of concentrated power and wealth, a city populated by millions of people whose stories were of no interest to the establishment media. Our concept is inspired by a zero-cost, zero-crew, low-equipment model. Armed with her smartphone, Gameela Ismail travels around Cairo to hear the stories of ordinary citizens, letting them talk at length in front of her camera, respecting their voices and integrity, bringing a genuine and refreshing conversation beyond clichés and stereotypes into the online world.

Gameela Ismail is a renowned TV anchor who spent most of her career working in mainstream national television. Unlike digital media stars who aspire to make it into the mainstream world, Gameela’s trajectory went in an opposite direction. No longer seeking to work in a media machine that manufactures old stereotypes about the city and its inhabitants, Gameela sought a way out of well-trodden paths and repetitive narratives in new digital media. Her status as a well-known anchor has allowed her to approach new participants with her camera, with the promise of bringing their voices to the public without the mediation of establishment media. This process integrates peripheral subjects into the core political and social questions of the day, which is facilitated by new, simpler technological means.

While Gameela’s Stories may seem like a one-woman show, there is a team of producers and editors working to seek out new stories across Cairo and to minimally edit the footage shot by Gameela. This team brings stories to life by adding more context to the work done by the interviewer on the ground. This makes the series into a collaborative exercise designed to inspire not only a new way of telling stories in and about Cairo, but also a new way of working in the city’s fraught media landscape. The team behind Gameela’s Stories is devoted to creating a collaborative working environment in which new ideas are generated in consortium, not by unilateral decisions.

The broader ambition of Gameela’s Stories is to push the media world away from a broadcast format to a “personal television” format – away from media produced by a narrow elite of broadcasters cooperating with authoritarian governments and corporations, towards media produced by small-scale operators building their own narratives through their own technological means. This new way of producing media will refresh the narratives peddled by mainstream television about Cairo and its inhabitants through a reinforcement of trust between small media, their participants, and their audiences.

Gameela’s Stories is not a political program: it is a political statement. Unlike mainstream talk shows and news programming, with its well-rehearsed narratives and polished look, this series brings a degree of raw, unpolished reality to the media sphere. Sitting with ordinary citizens and talking to them about their lives, their concerns, their hopes, their dreams, and their problems is not conducive to extensive discussions about formal politics, but it is a political gesture in a context where these voices are seldom heard, or even given enough legitimacy to be heard. By following political events using a grounded lens, the program explores the numerous untold stories of citizens across Cairo to shine a bright light on the underbelly of the city.